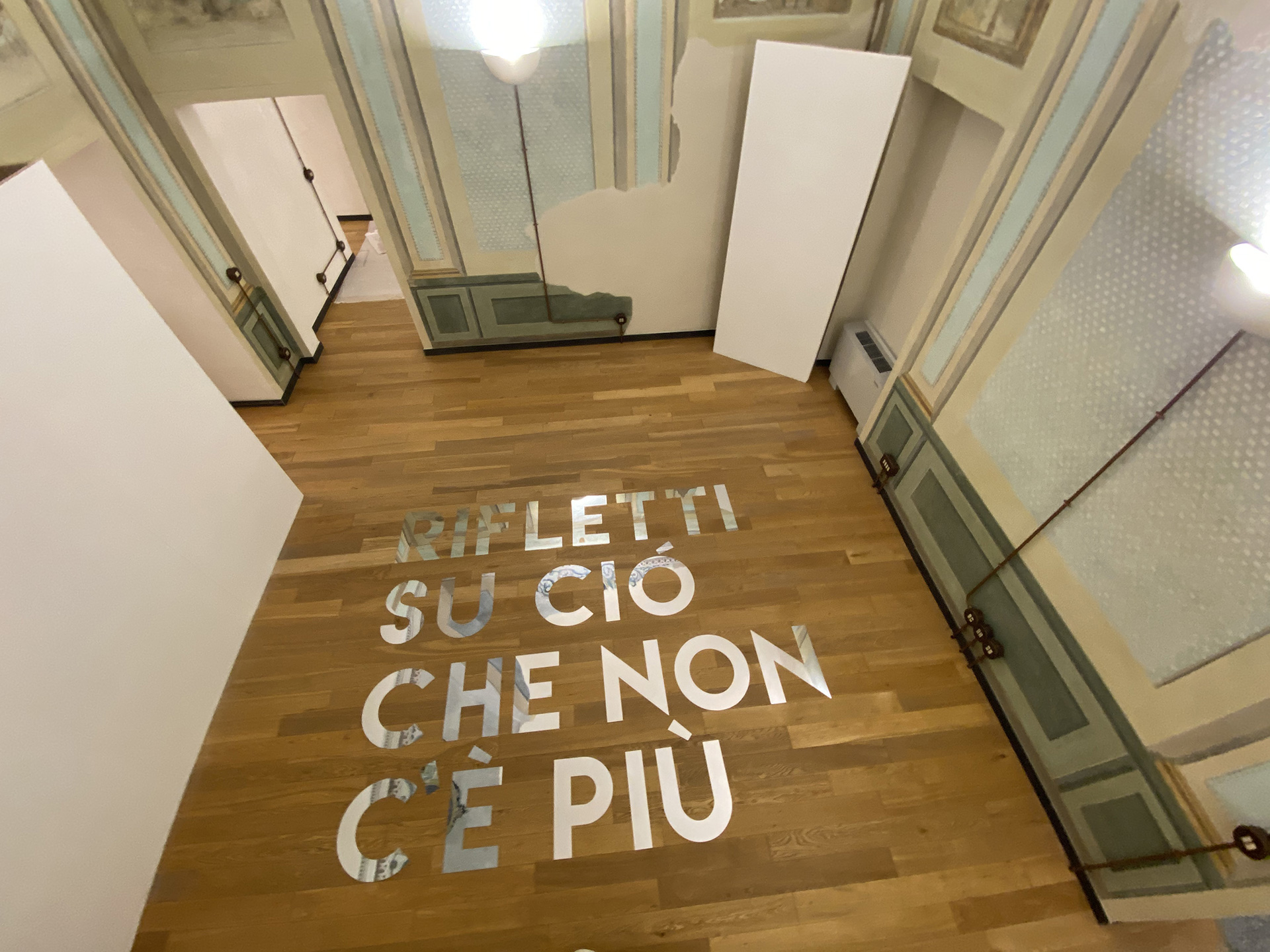 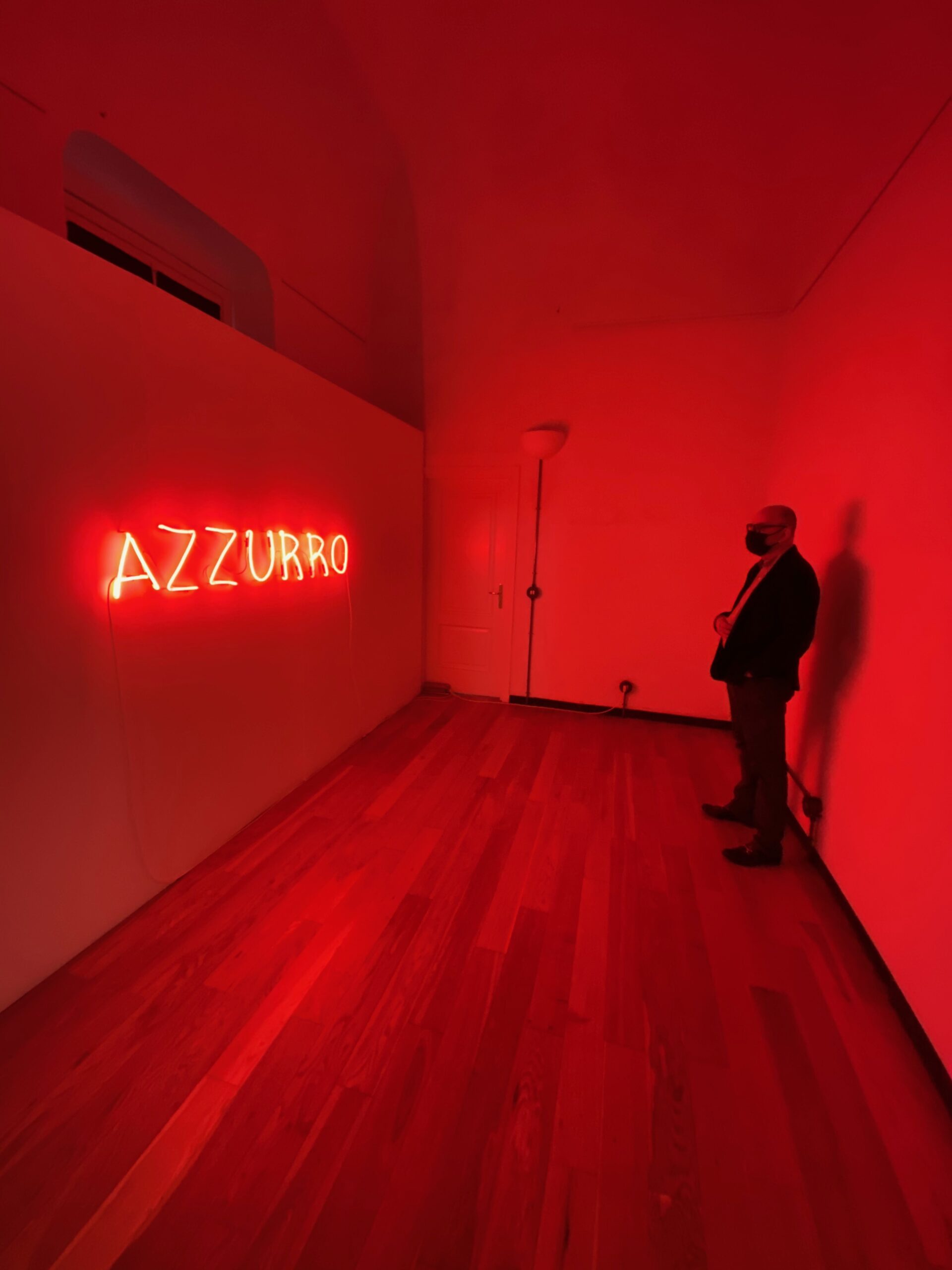 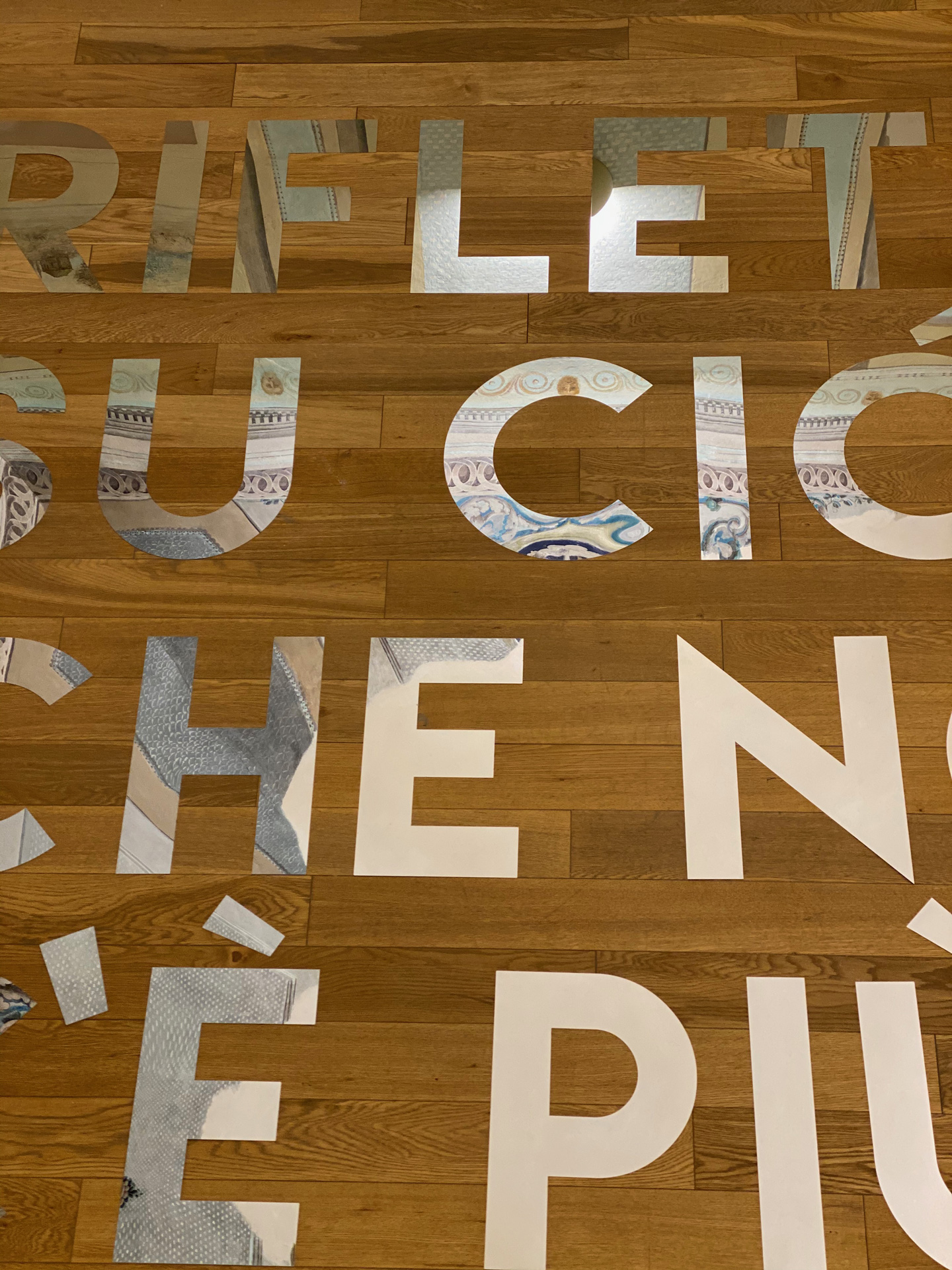 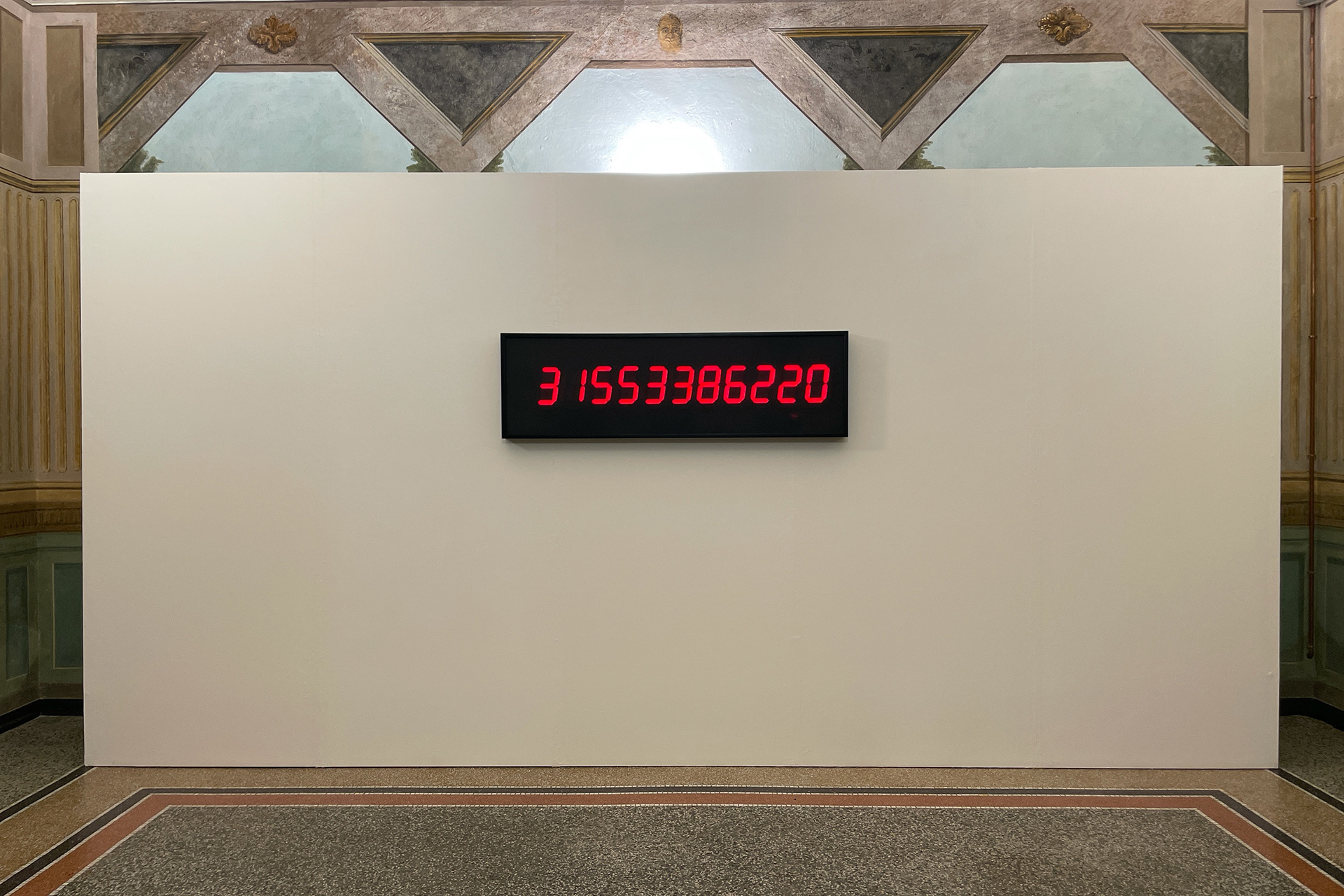 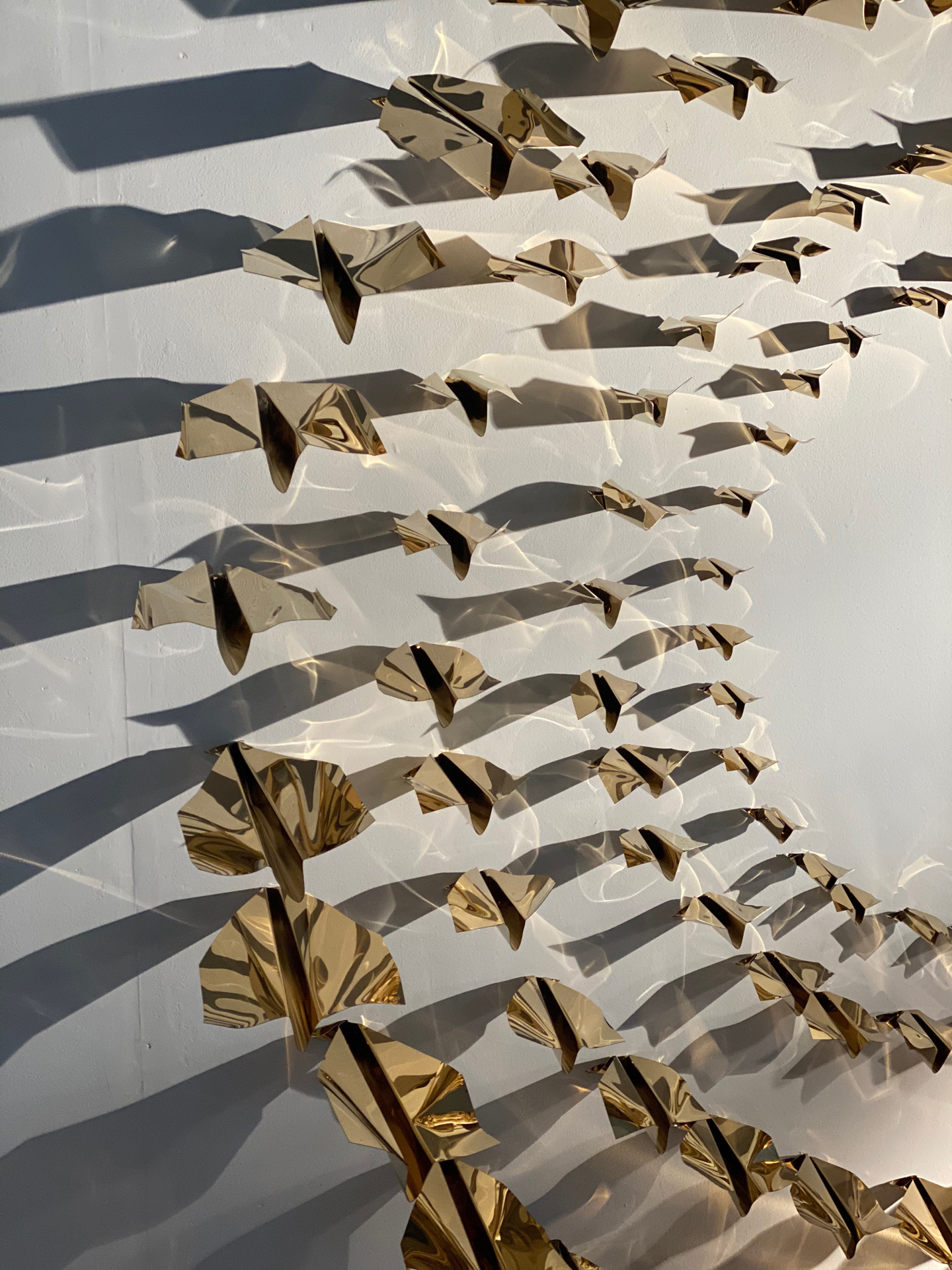 Daniele Sigalot depositary of a strategy, in the implementation of projects conceived conceptually and put in place visually, finds the aesthetic way to combine the form to the idea, creating large scenarios of site-specific installations.

“Una sfida al Nulla” is presents a sequence of installations that combine the artist’s “topoi” to the architectural stylistic features of Tagliaferro Palace, even reproducing its friezes in its carpets of colored medicinal capsules.

“Could you help me make a countdown that is a little unusual in duration?”

“How long should it last?”

“Something simple: a thousand years!”

“Why a thousand years?”

“Because I think that’s long enough.”

The public of Contemporary Culture Center – Tagliaferro Palace is confronted with a composition, on the floor, of anxiolytics that lead back, metaphorically and psychologically, to the depressive effects induced by the hammering anxiogenic language of mass media and social networks, in the era of the Covid 19 pandemic, spread without interruption.

A white wall becomes a “geometric” target, in concentric circles, of 128 steel microaeroplanes, produced by the company Wem. Usually made of paper with the oriental technique of origami, this art object is charged with a double valence oscillating between playful, in childish hands, and warlike, in adult hands. Obsessive the repetitive gesture to make it, ironic the reversal of the material from fragile to resistant. The installation “Bip,” made up of micro-airplanes now oxidized and now shiny, while on the one hand refers back to an eerie electronic beep, on the other outlines, on the wall, a sort of Zorro’s Zeta, of cattelanian memory.

The curators of the exhibition, Viana Conti and Christine Enrile, invite the public to experience the exhibition event, right from the entrance, as an authentic game challenge, establishing a relationship of complicity and involvement with Daniele Sigalot. The aesthetic context in which

Sigalot connotes himself as critical and self-critical at the same time. Aware of the difficulty of immediately understanding a contemporary art product, he takes on the role of the informed spectator who attends art fairs and major international exhibitions, or that of the protester, who trivializes the artist’s gestures such as, for example, Lucio Fontana’s “iconic cut”, Piero Manzoni’s jars of shit, or Andy Warhol’s Campbell’s Soup, which anyone could practice. The series of steel Post-it notes: I could do this too, Nothing significant here, When I bought this artwork I had evidently abused Champagne, on display in the exhibition, has precisely this paradoxically self-critical function. Photographs of distress signals of colored smoke at sea and other elements of provocation and defiance, while prompting the viewer to reflect, also cite artists such as Cattelan and Koons, who are active/reactive in a similar context. Still in this spirit, the neon Azure sign creates an effect of red on the wall.

The reflective steel installation “When the ceiling discovered it was no longer there,” in one of the splendid rooms of Palazzo Tagliaferro, admirably restored, restoring life to the frescoes but leaving part of the ceiling white, represents the perfect expression of lightness and play of the absurd to which the artist wants to introduce us.

Daniele Sigalot, in an age in which anthropos can reach a century of life, works on the temporal dimension as in the electronic installation “Enough” The function of the work is to answer the question about its possible validity, one thousand years after its realization. The artist addresses, in a mass society, connoted by an irrepressible consumerism, with lucid irony and a playful/critical spirit, the question of the gratuitousness of the artistic gesture in terms of profusion, myriad repetition of the same object, perceptual ambiguity, excess.

“Daniele Sigalot engages in a punctilious search for the right sense where it does not exist or does not cease to deny itself. Each of his works, each of his mega-installations, represents an iridescent self-portrait whose subject questions itself without waiting for any answer. is it perhaps an absurd game, a challenge to nothingness, a systematic practice of self-denial? The effect obtained, however, is that of making the spectator reflect on those basic values that have come to lack, on the profound questions of being, enveloping him in phantasmagorical dreamlike scenarios. His fetishes are objects, attitudes, words, provocations to the sense of existence and of making art”. 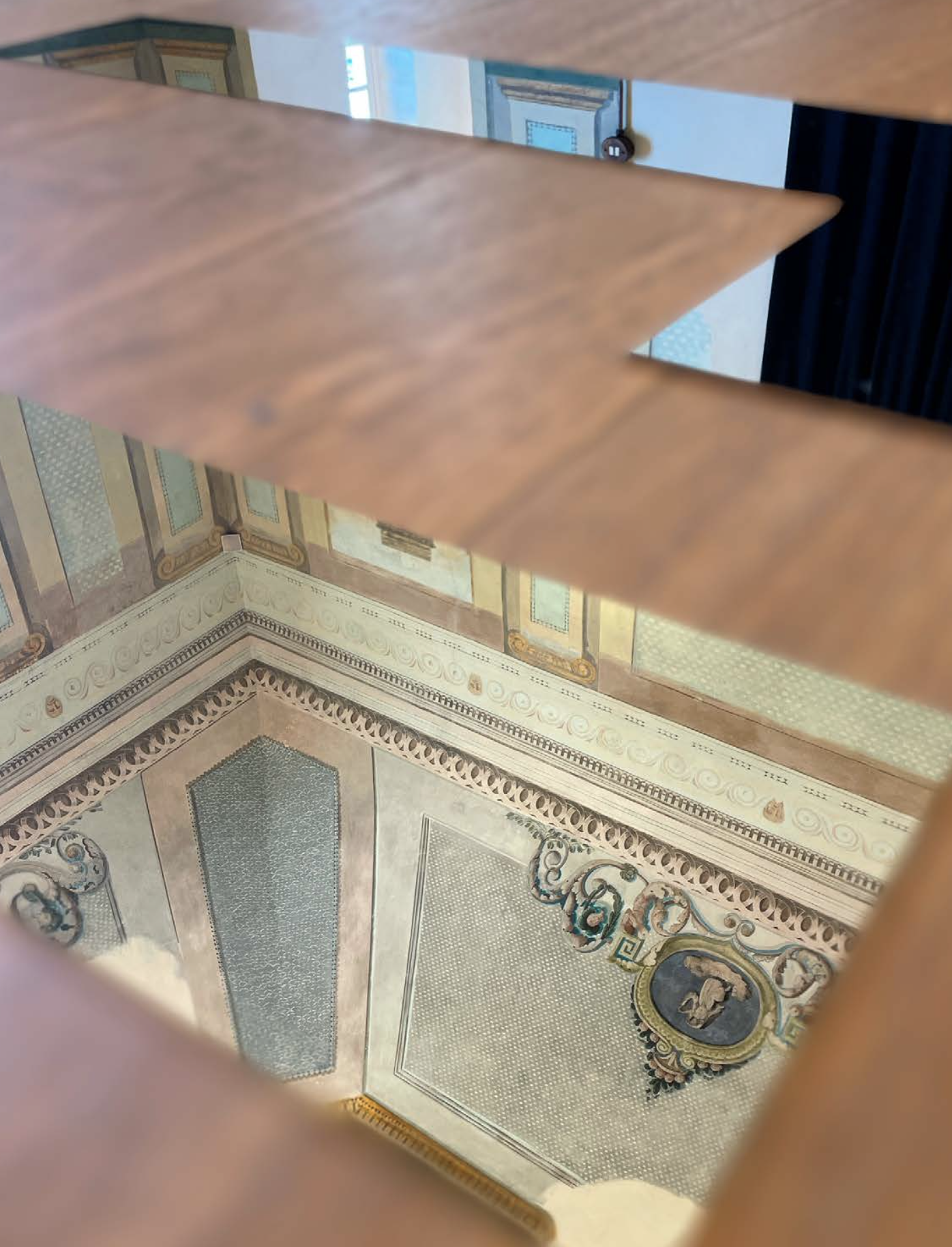