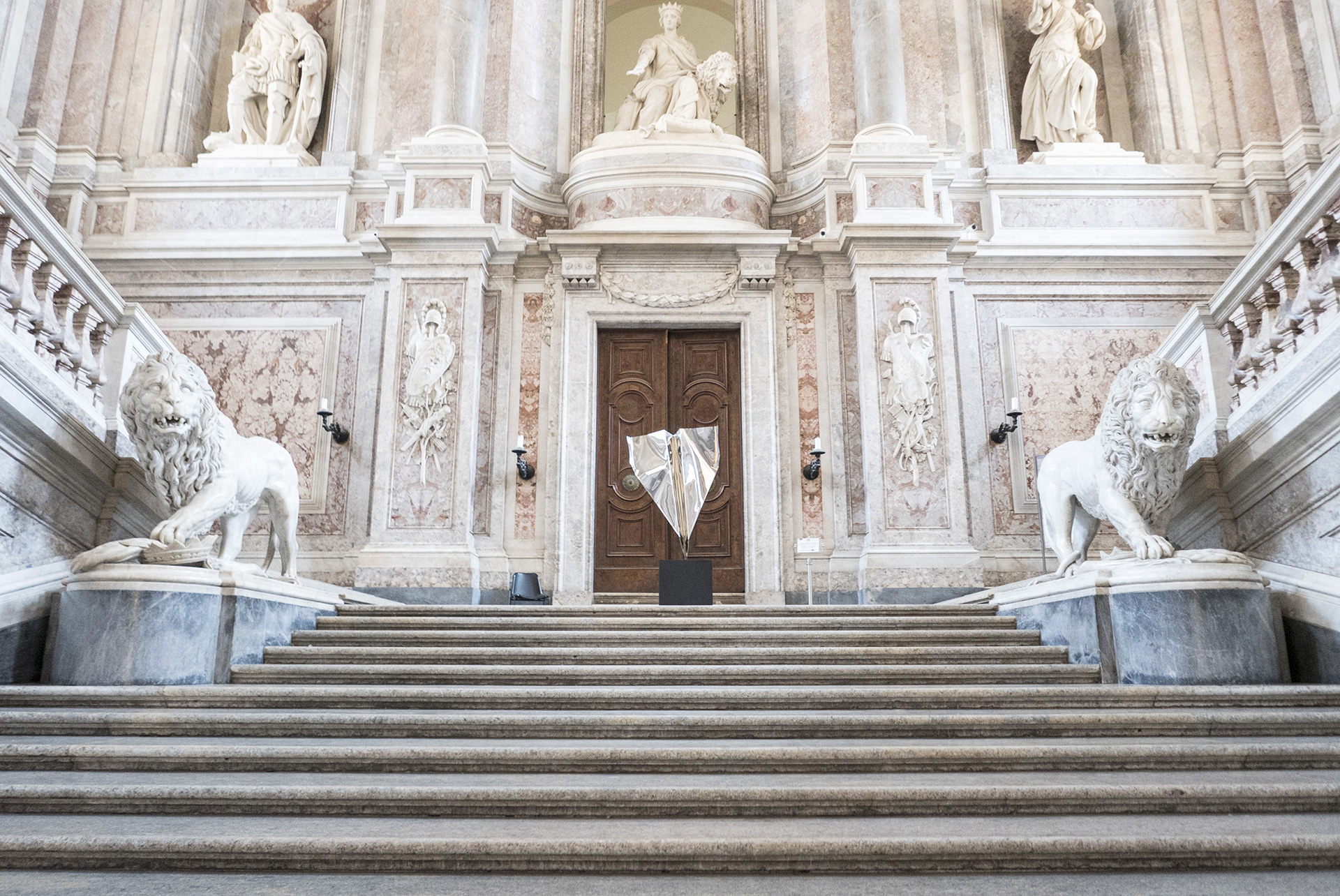 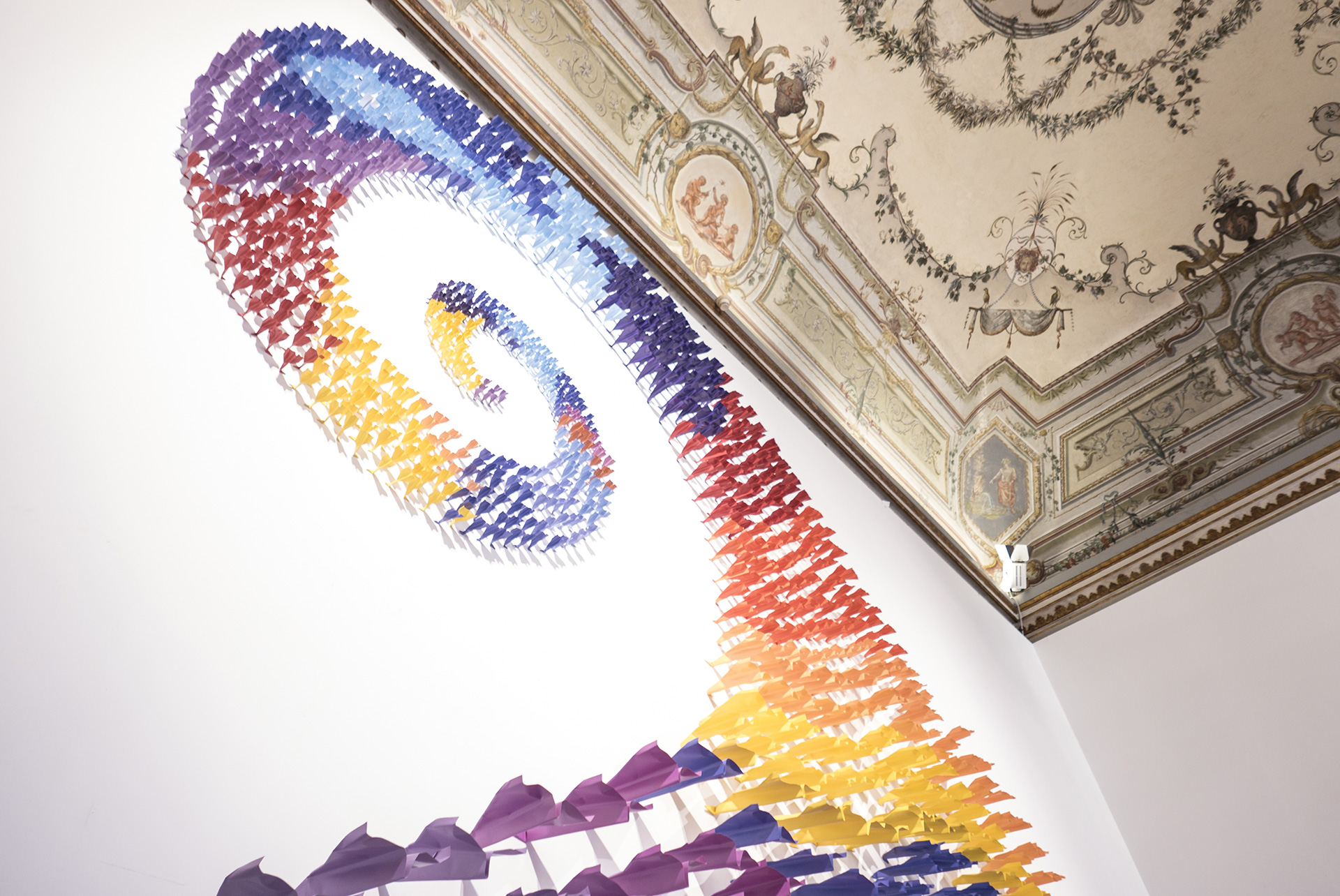 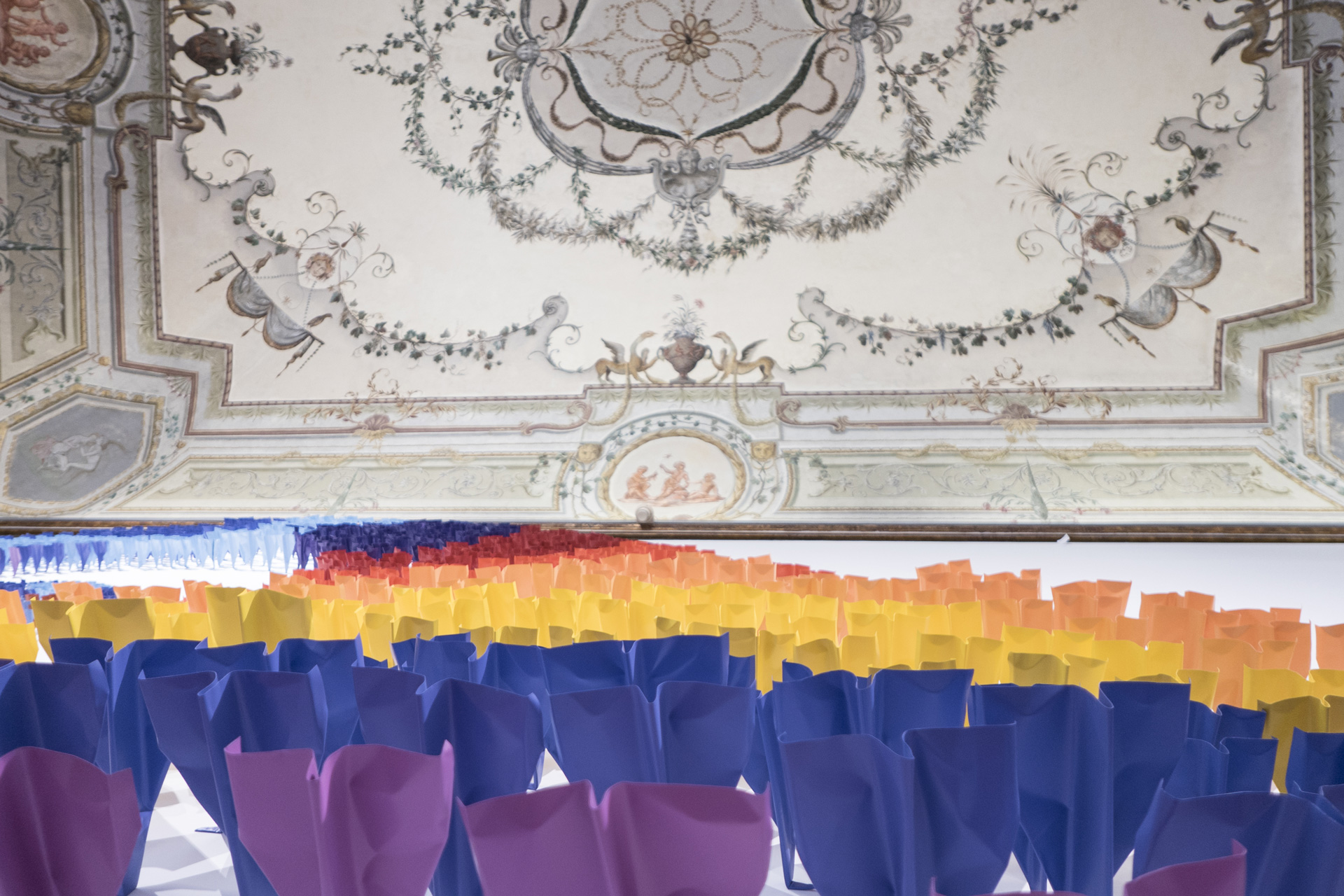 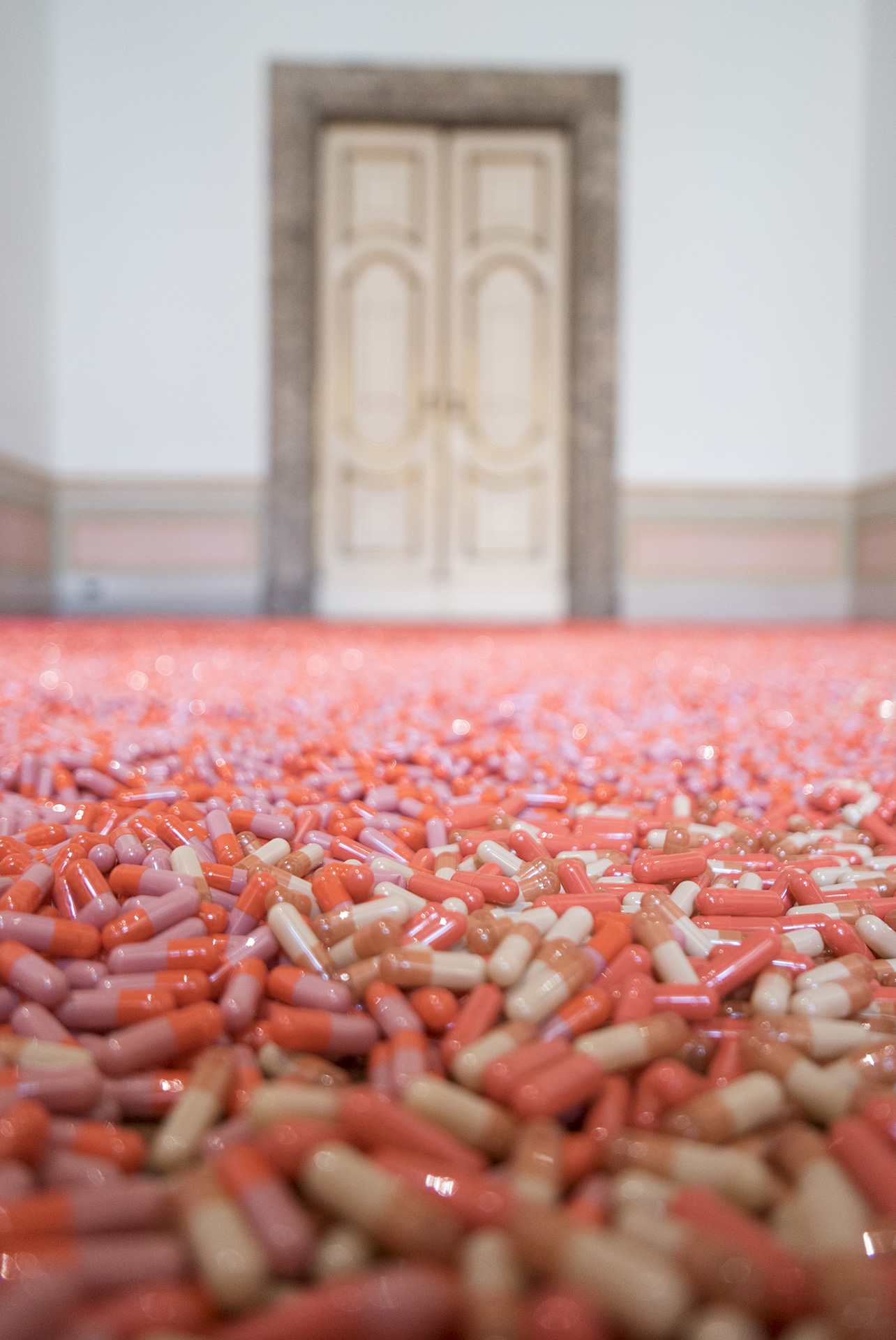 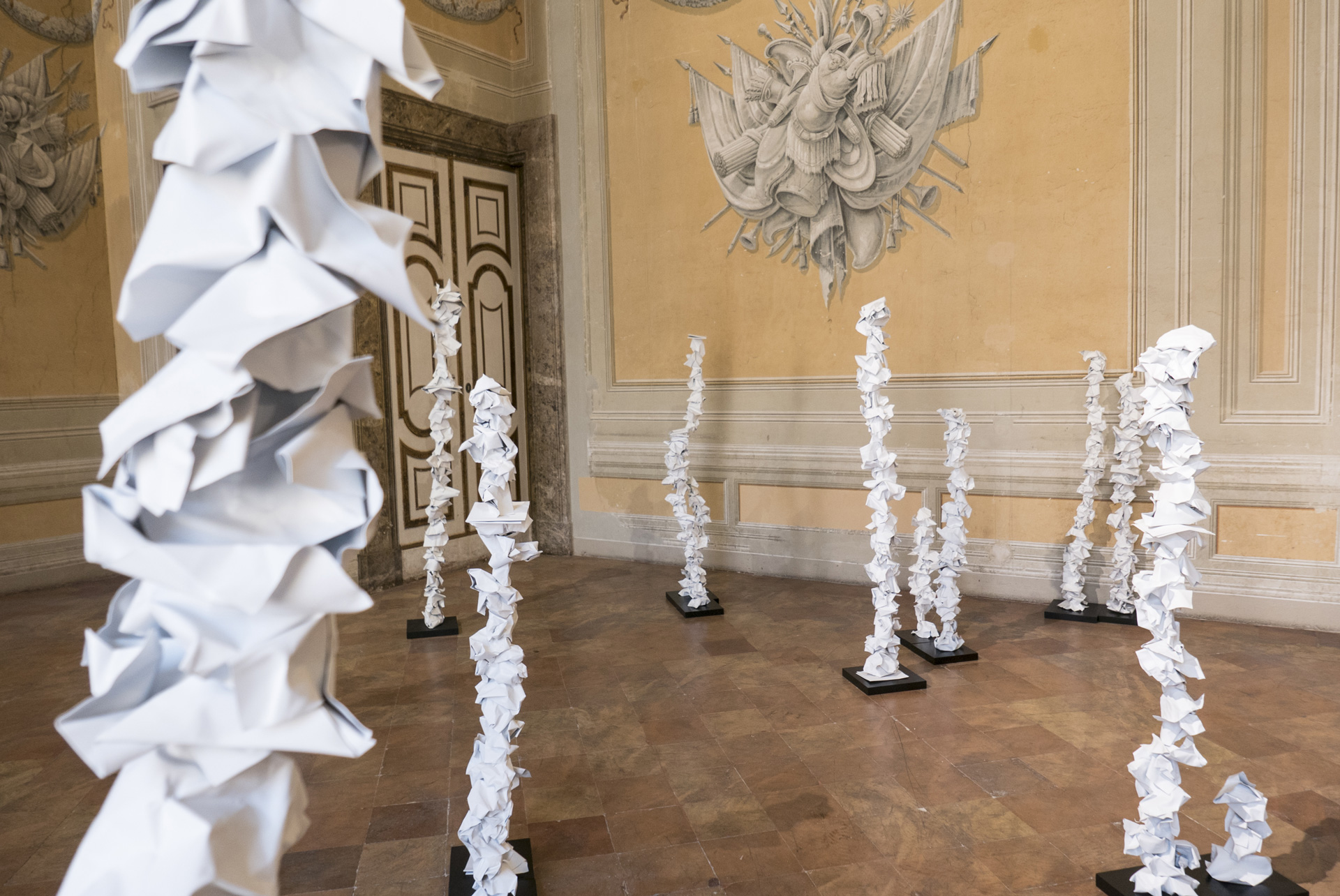 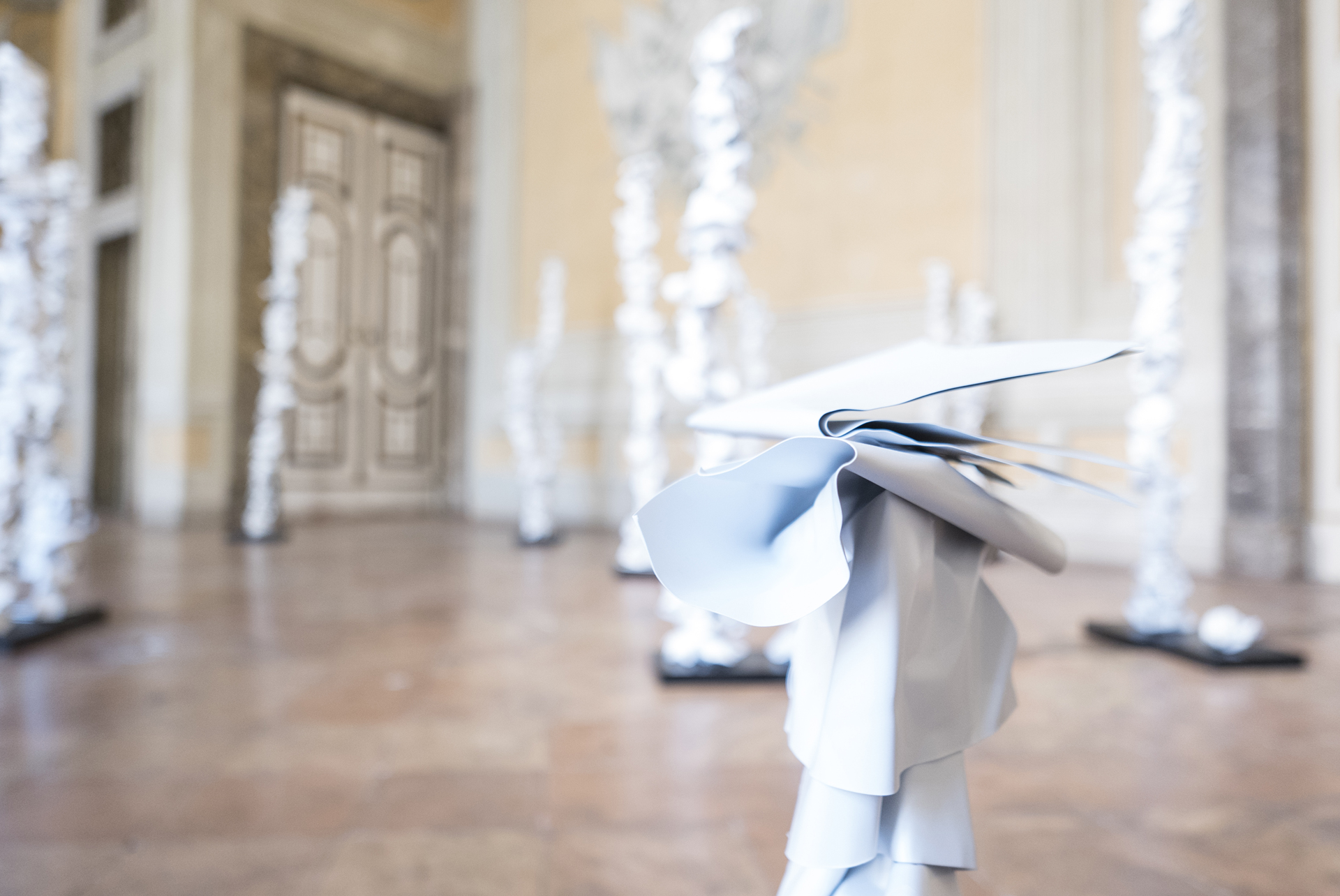 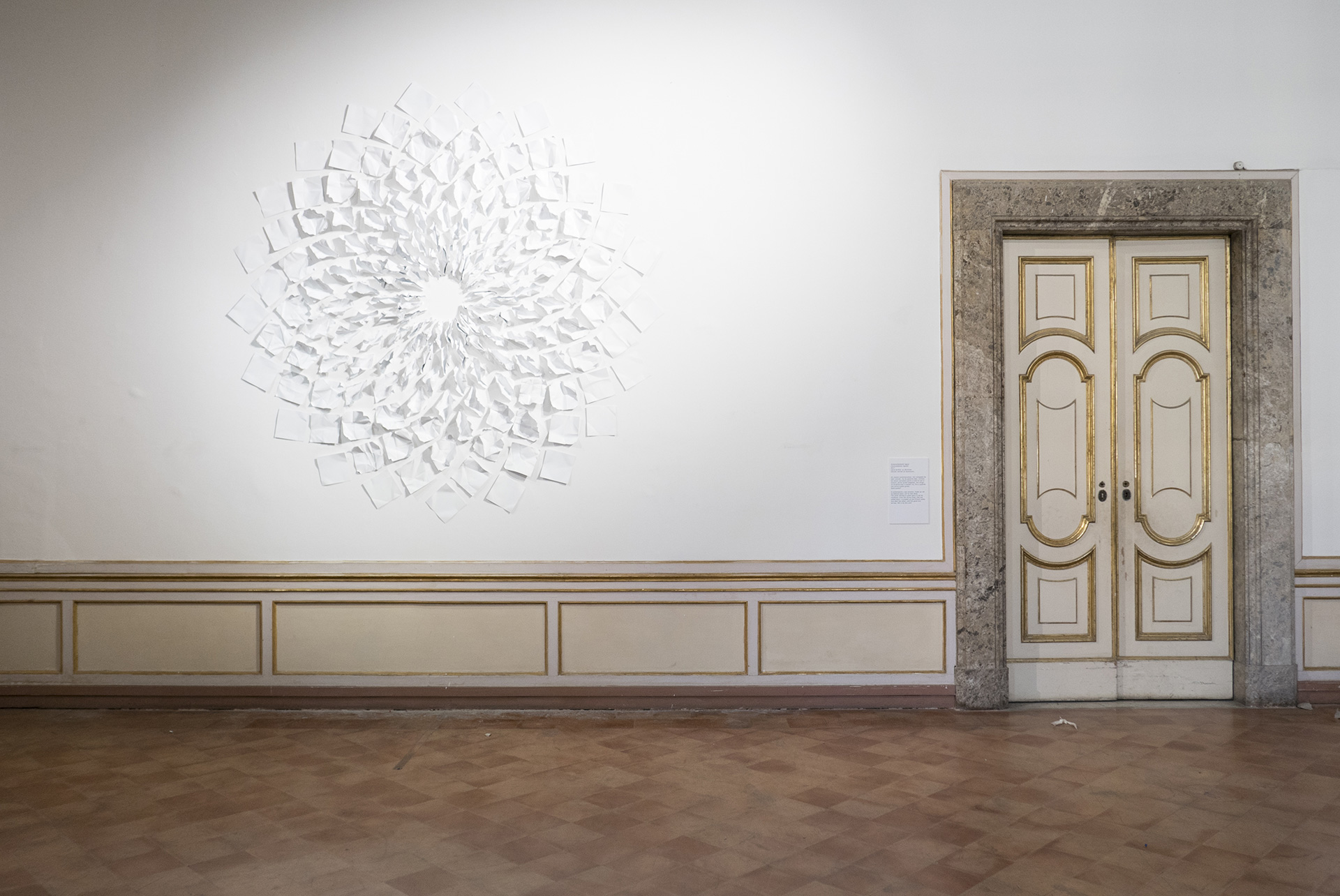 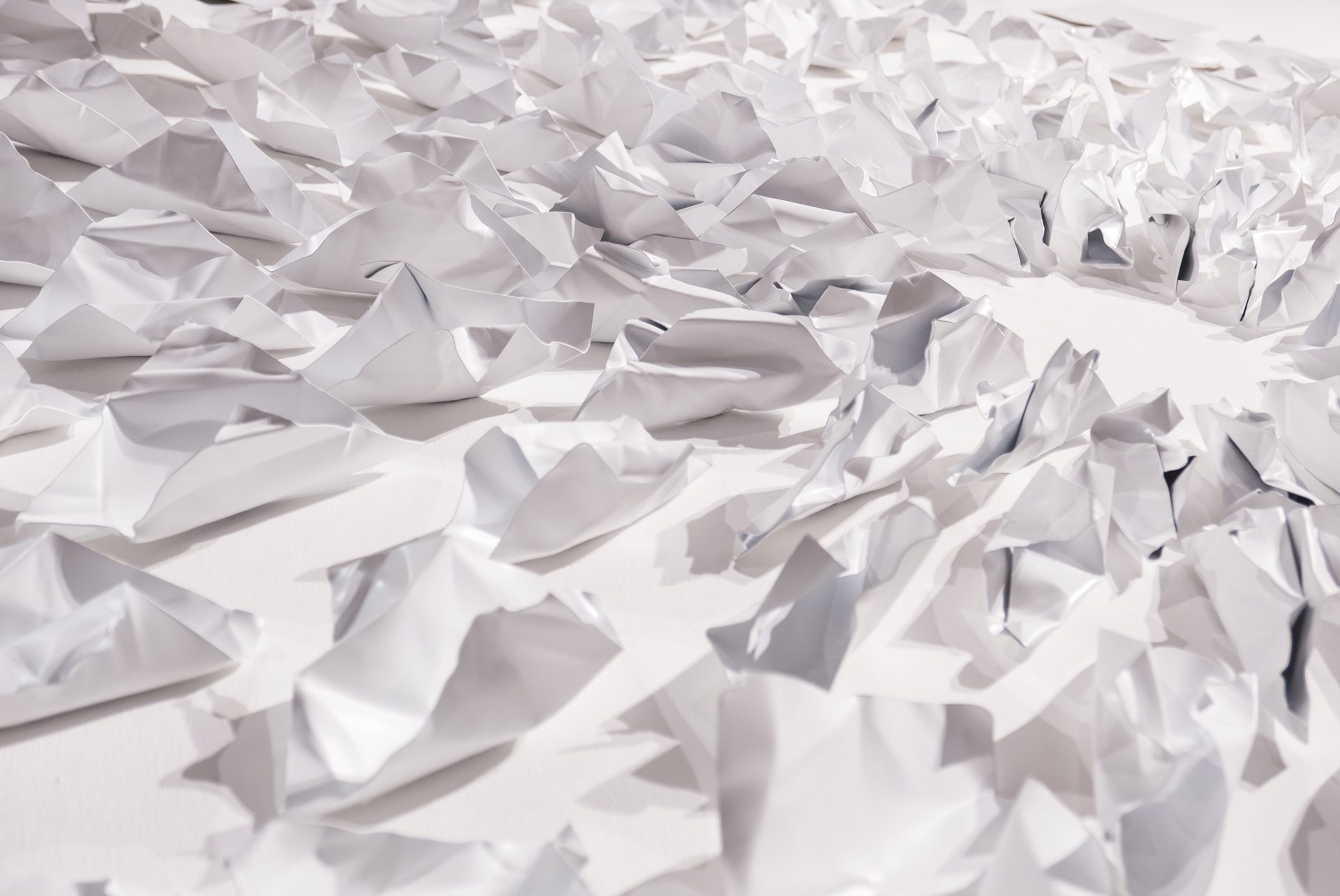 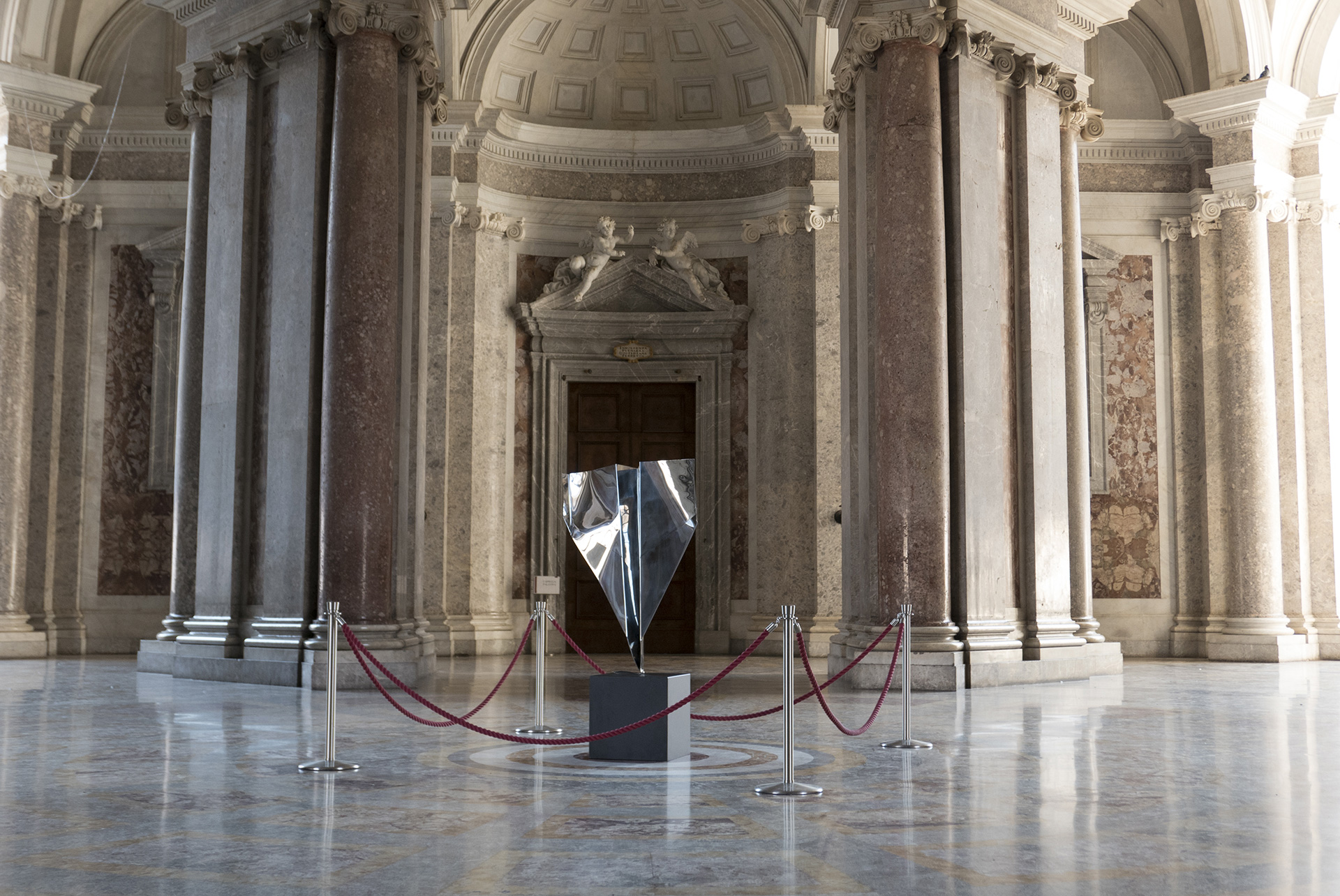 The title “Tutto è già vostro” (Everything is already yours) is a tribute to Charles of Bourbon (who would be called Charles III once he became ruler of Spain): it is a quotation from the First Volume of The Antiquities of Herculaneum Exposed, a decisive work for the culture of antiquity, born out of the activities of the Herculaneum Academy, founded by the enlightened ruler himself.

On the opening page of the volume one can read the words of the Herculaneum academicians addressed to the king: 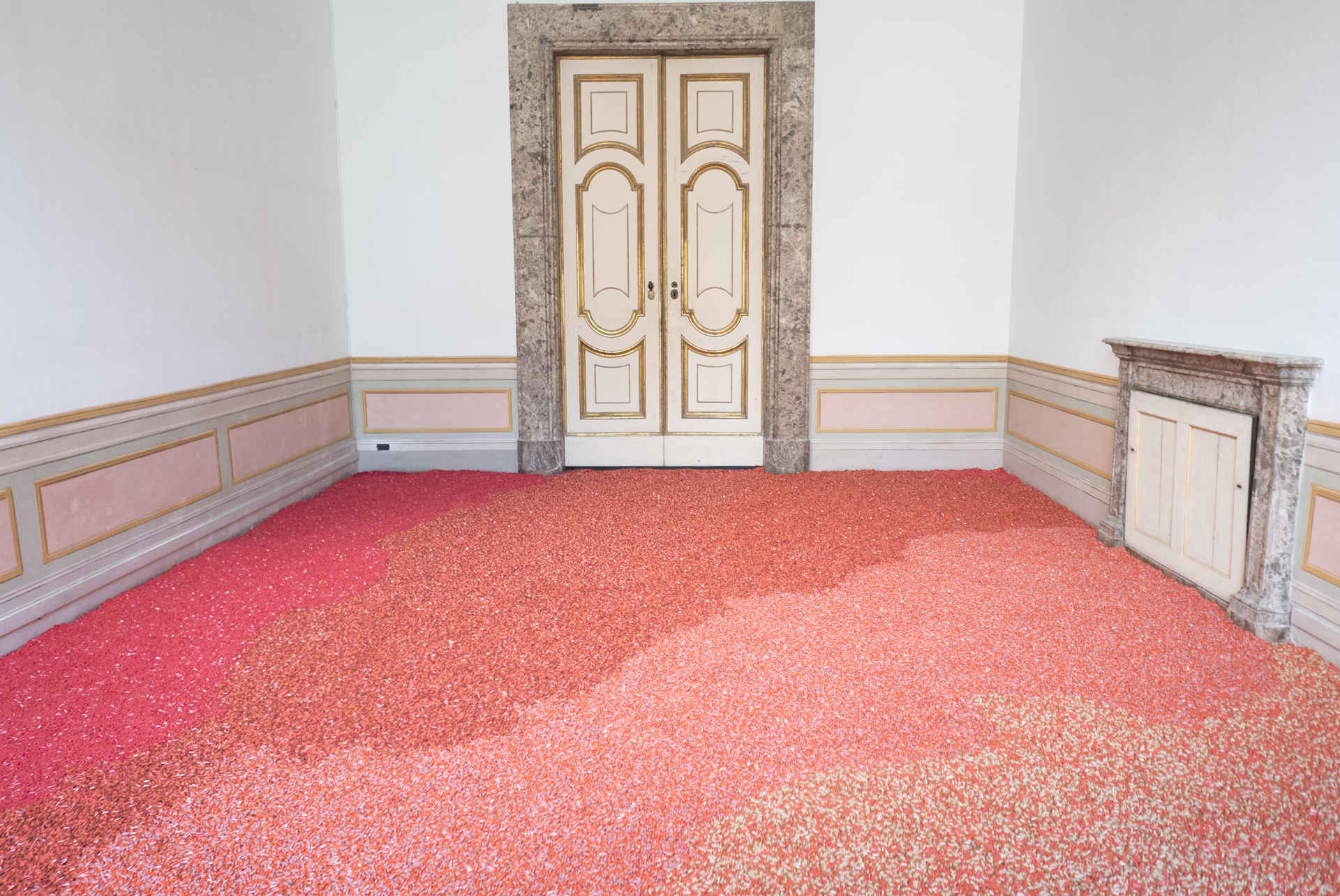 “In offering to Your Majesty the first Tome of the Antiquities of Herculaneum, and Surroundings, concerning a small part of the paintings, we feel the great honor, which comes to us from your kindness. Everything is already yours that we bring to you.“
(from: The ancient paintings of Herculaneum and contours engraved with some explanation. Volume I, Naples, Regia Stamperia, 1757)

Like the academics of Herculaneum, Daniel Sigalot knows that to offer something to a king who possesses everything is a bold gesture; even bolder is to hope to be able to amaze him. And if the Majesty in 1757 was one, today visitors to the Palace number in the thousands, capturing their attention is difficult, because they are already immersed in a masterpiece of beauty. Daniele’s installations are undoubtedly scenic-the only way not to disfigure in the presence of Vanvitelli’s Scalone d’Onore!

Observing his works we witness a kind of postmodern trompe-l’oeil: on stage there is an object that reproduces the imitation of another object, whose likeness we recognize, except to realize a moment later that the materials with which it was made are not usual. In fact, they take on an opposite function.

The immediacy of Sigalot’s language remains consistent even in his choice of materials: in his airplanes, a trademark of Blue and Joy since time immemorial, aluminum has replaced paper, depriving it of its extemporaneity. The game of our childhood thus becomes eternal, without abstracting from its place, so the planes stick into the wall reproducing the floor of the nearby Astrea hall. The planes are also made of steel, the first time the artist measured himself with this alloy, spending days in the factory experimenting. Both aluminum and steel are poor materials, yet they resemble precious metals, another misunderstanding in pure Blue and Joy style.

The undisputed stars of the exhibition are precisely the ideas, made into objects: two rooms grant glory to all the artist’s insights, even the wrong ones. The now-obsolete image of the scholar tossing out papers, crumpling them when he is not satisfied with his findings, comes to life in renewed guise. Once again the papers are made of painted aluminum, indistinguishable from paper when viewed from a distance. The bad ideas are necessary to foster the arrival of good ones that ma- lapena distinguish themselves from the crumpled ones, and appear less interesting.

Daniel shows himself to be a child of both the avant-garde, pop art (is it a coincidence that he worked for ten years in advertising?), and undoubtedly ni- able of the Young British Artists. Impossible not to discern quotations from a master of Arte Povera like Pistoletto in his self-portrait, as well as an homage to Hirst in Untitled. Artists know this: nothing is invented, art is cyclical, it returns in different forms, all that matters is being able to immortalize one’s era. An era in which pills are synonymous with happiness, as in the room that Daniele has decided to flood with capsules. But after all, haven’t pills always been a symbol of escapism and freedom? Didn’t they also give happiness in The Matrix or Alice in Wonderland (in the form of mushrooms)? Or perhaps the pills are just a gimmick, to attract the viewer, in an eternal play of parts and an interpretation that can only be suggestive and personal.

Sigalot does not lose touch with reality, however: his letters to fate and fu- ture are those that every precarious worker would like to address to the unknown that awaits him. The artist also addresses the “Goddess Art,” the one who welcomes on the O- limpus only those who make incomprehensible works. Certainly not his own.

The exhibition closes with a question: are installations destined to be forgotten? Can only painting aspire to eternity?

With the work Enough Sigalot wants to show fellow, and friends, painters that even installations can defy time: an irreversible chronometer with a double power supply occupies the last room. It will continue to count until April 28, 3016. Wherever it is. Ultimately, to really understand Daniele Sigalot’s works, it is enough not to take oneself too seriously, and especially not to take too seriously a re- alt that acclaims and makes art of anything, as long as it is incomprehensible. The phantom power of the artist does not exist; art happens in the eyes of the os- ser, in his audience.

Daniele attempts to amaze and deceive the mind: these are the only rules of this game that thrives on equivocation, both semantic and semiotic. 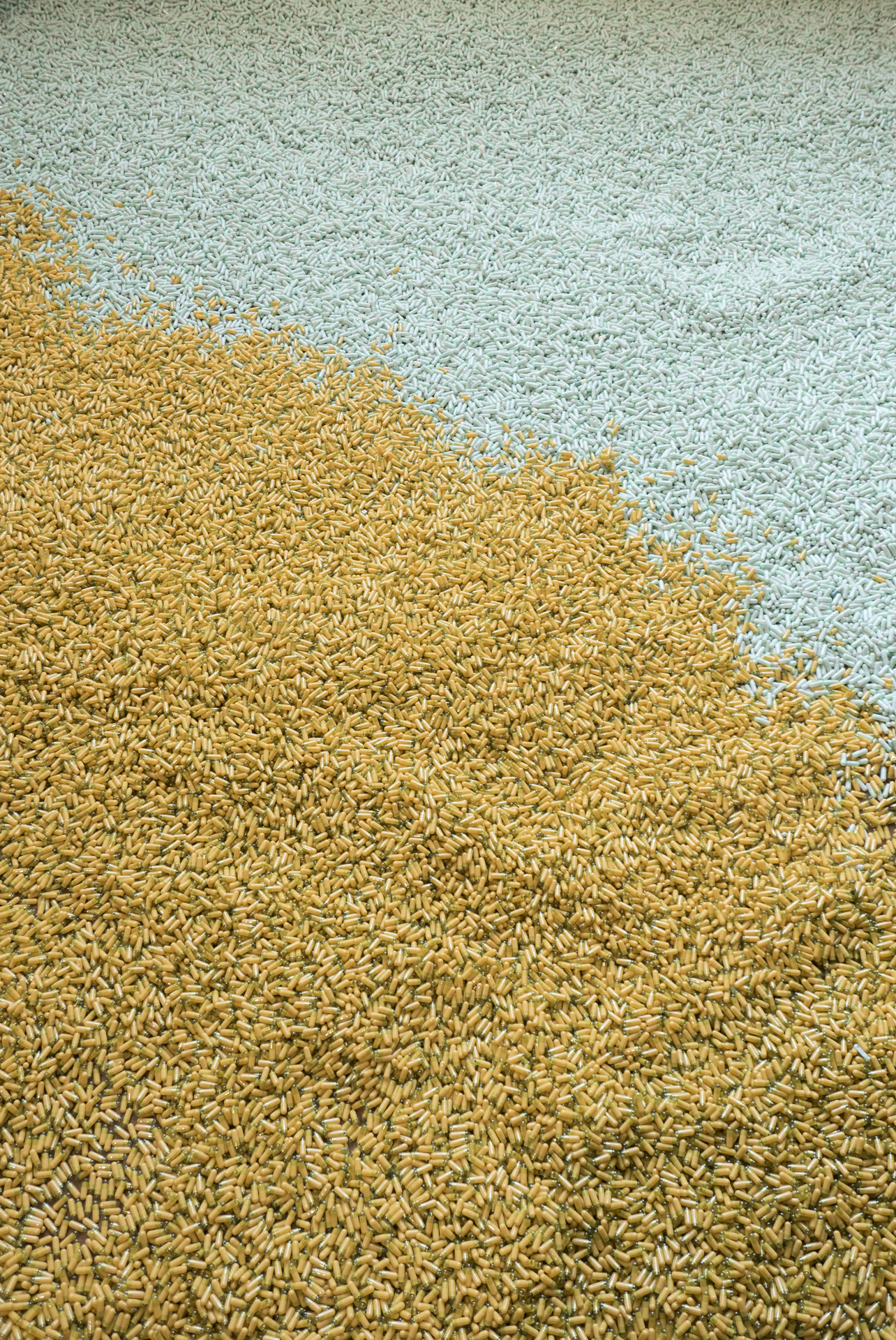