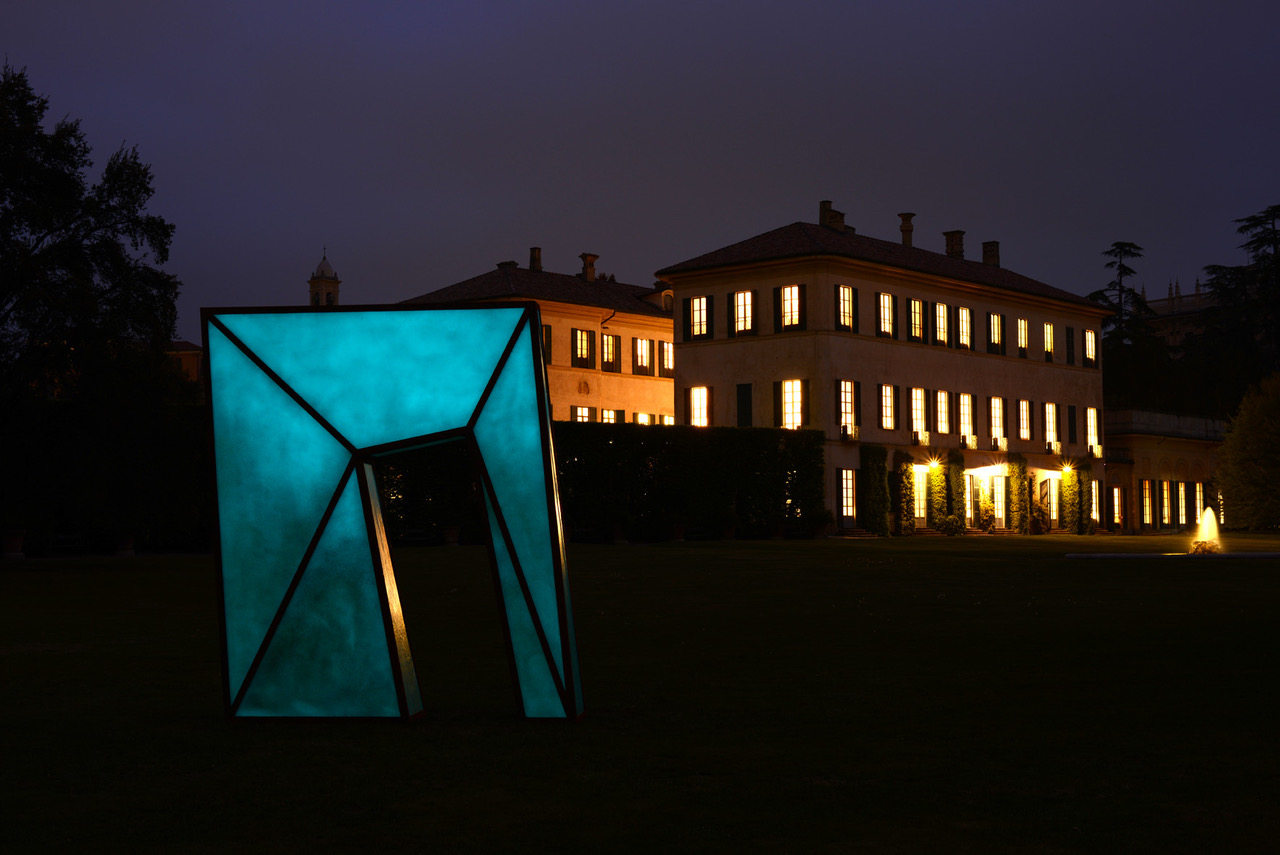 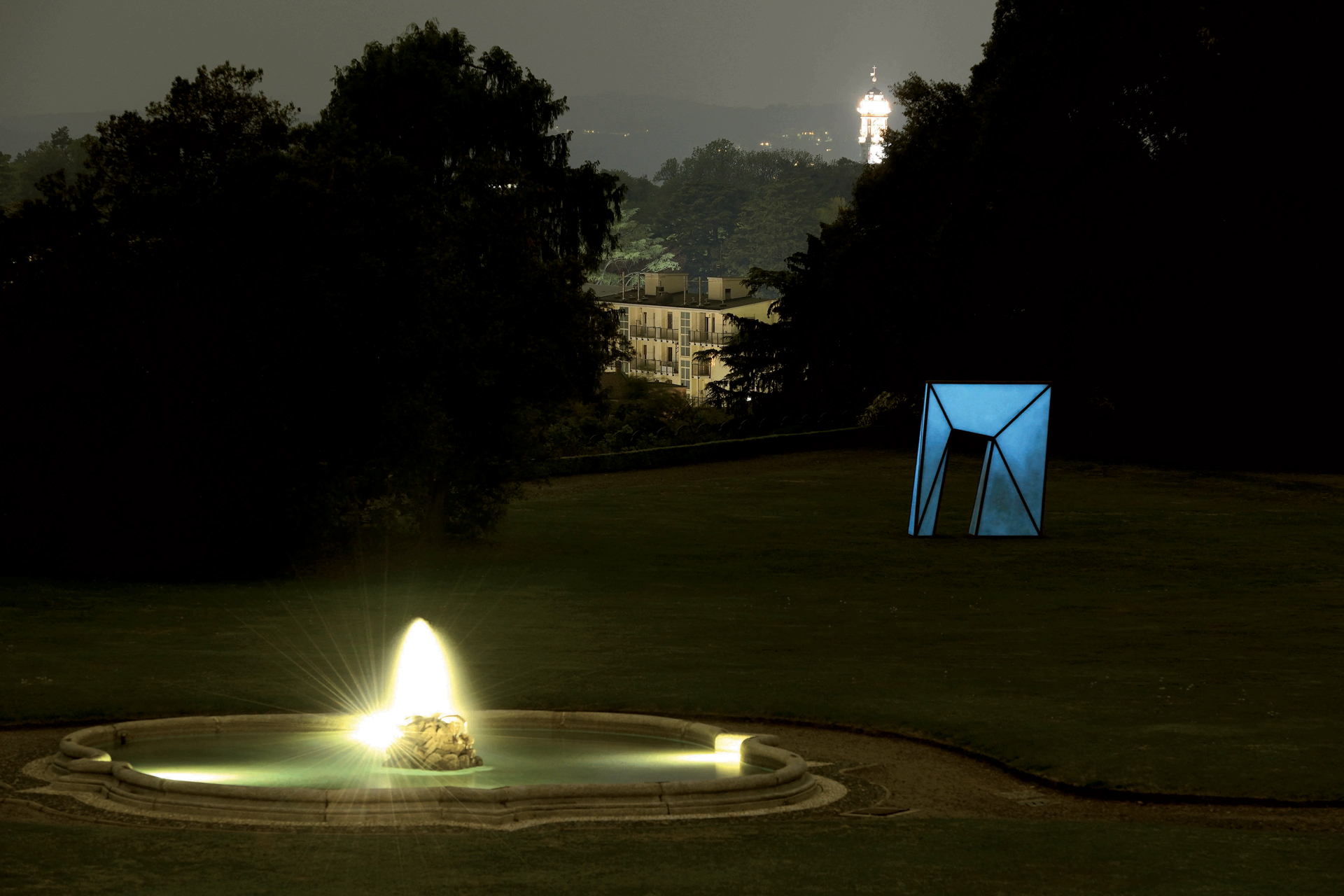 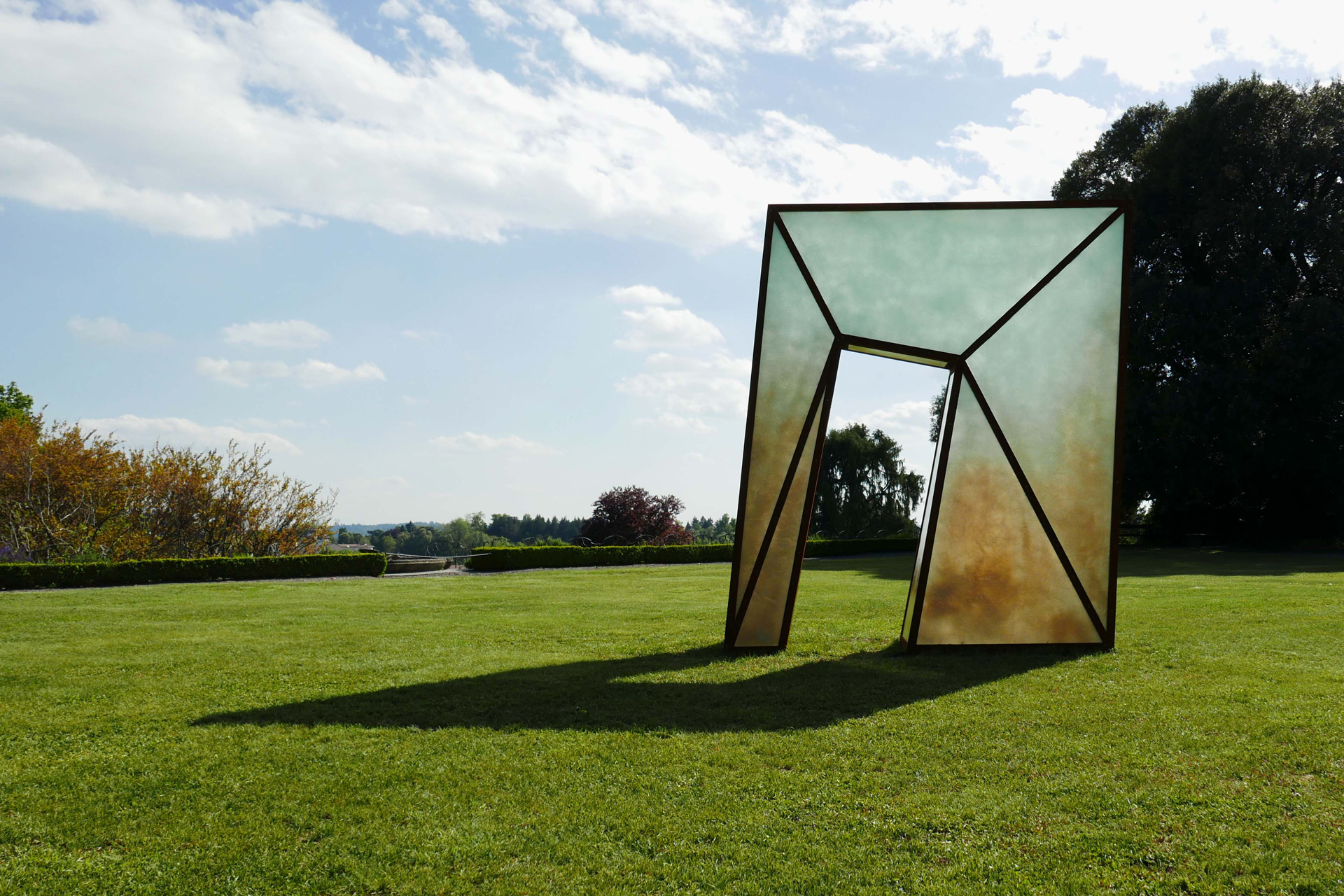 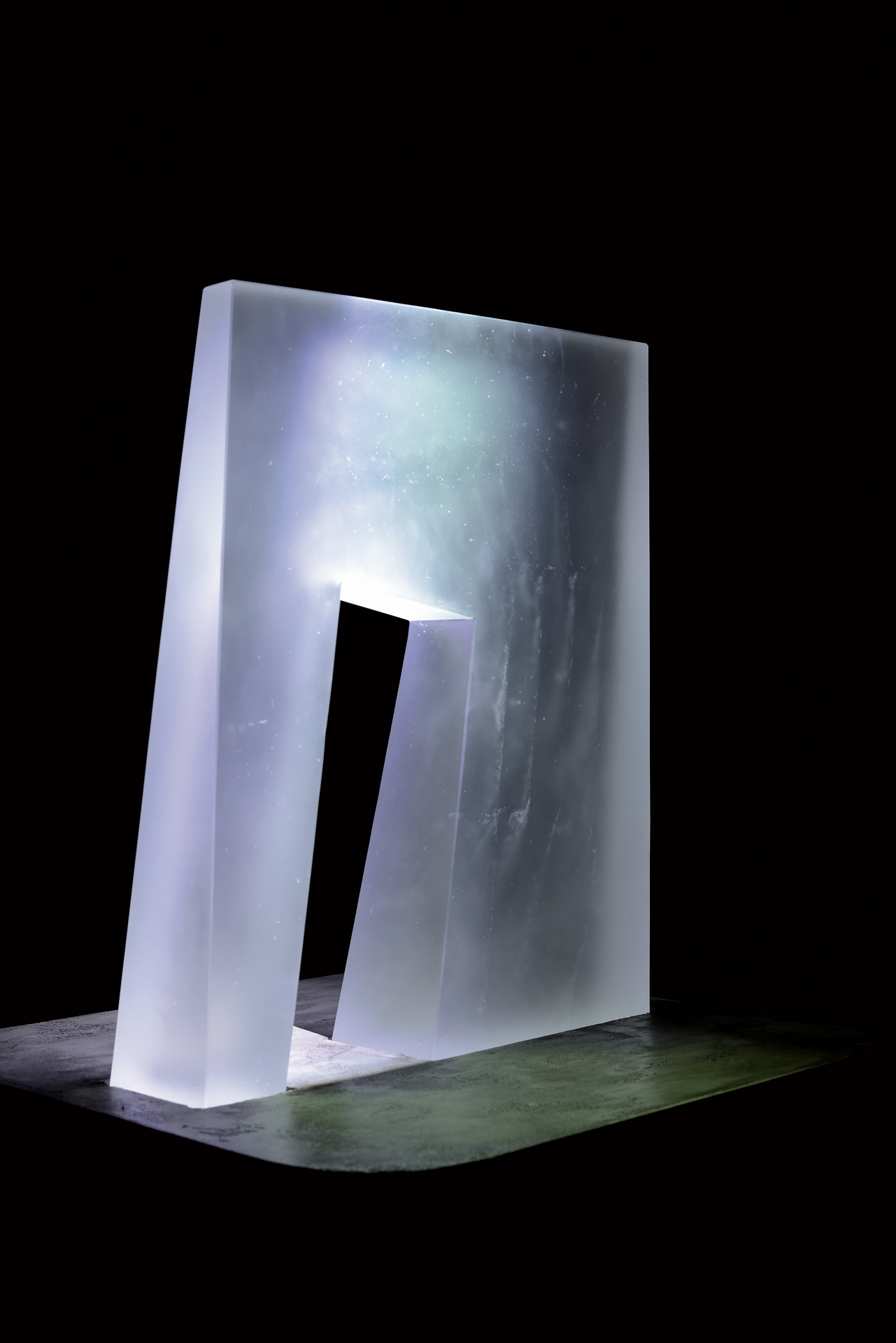 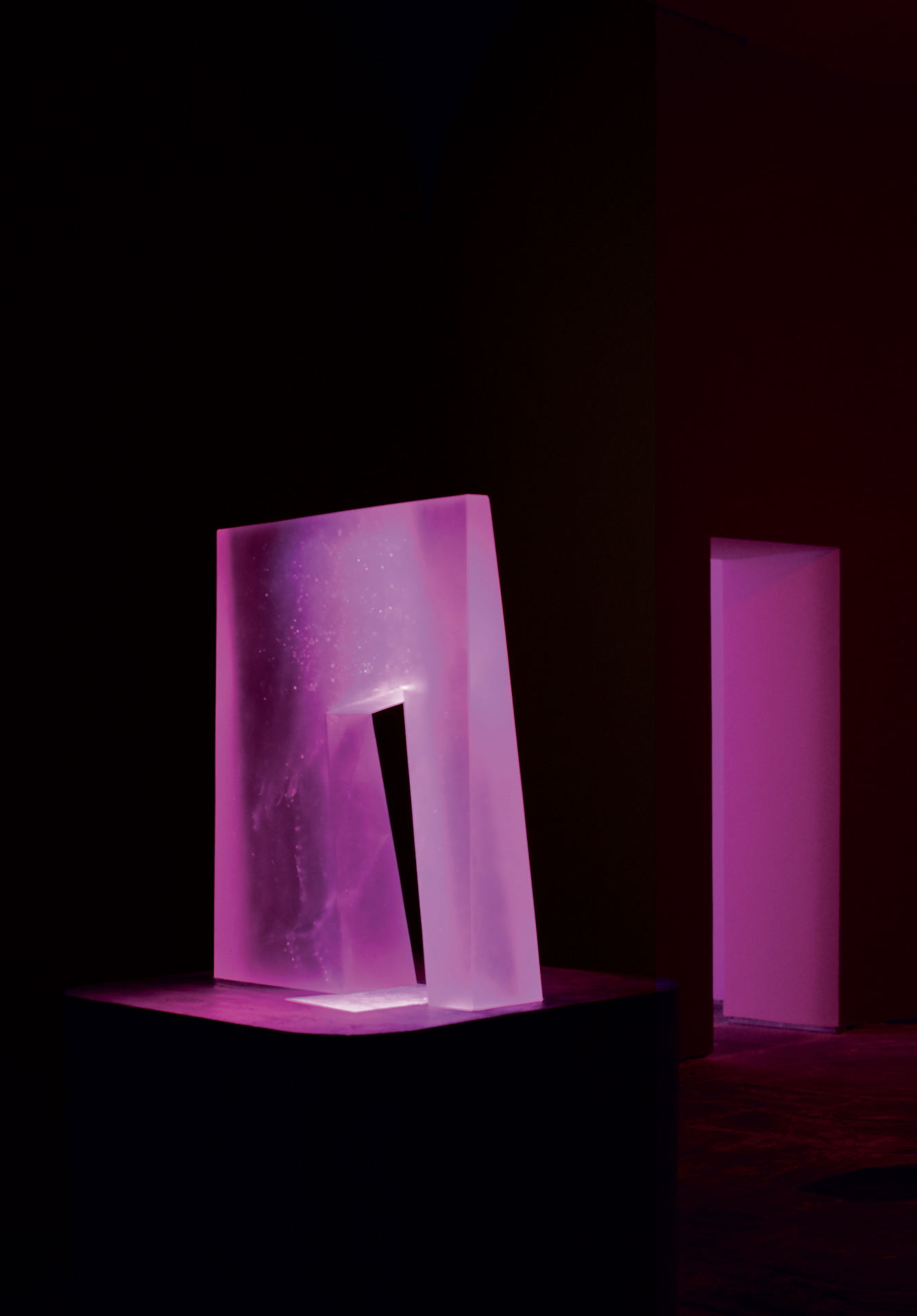 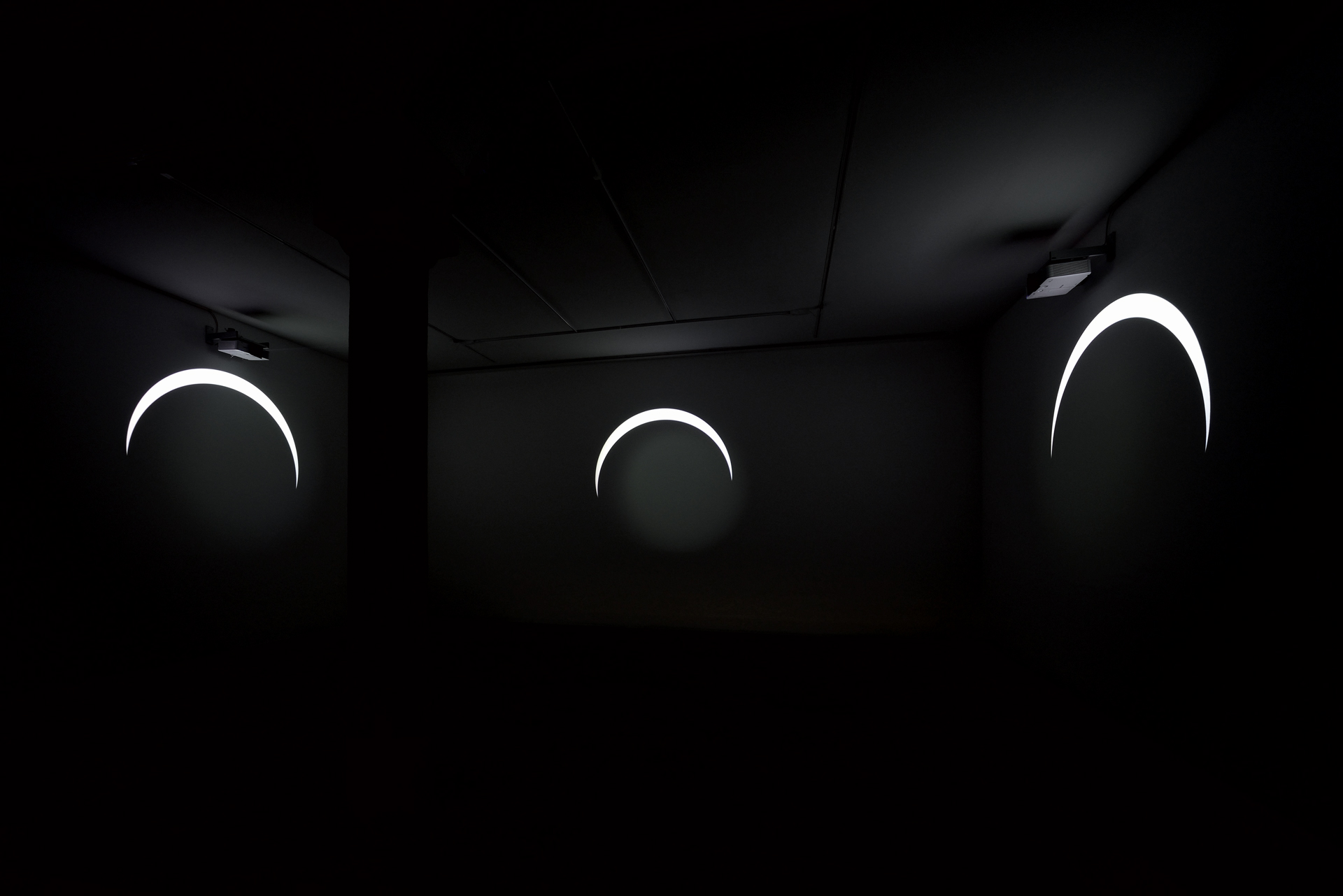 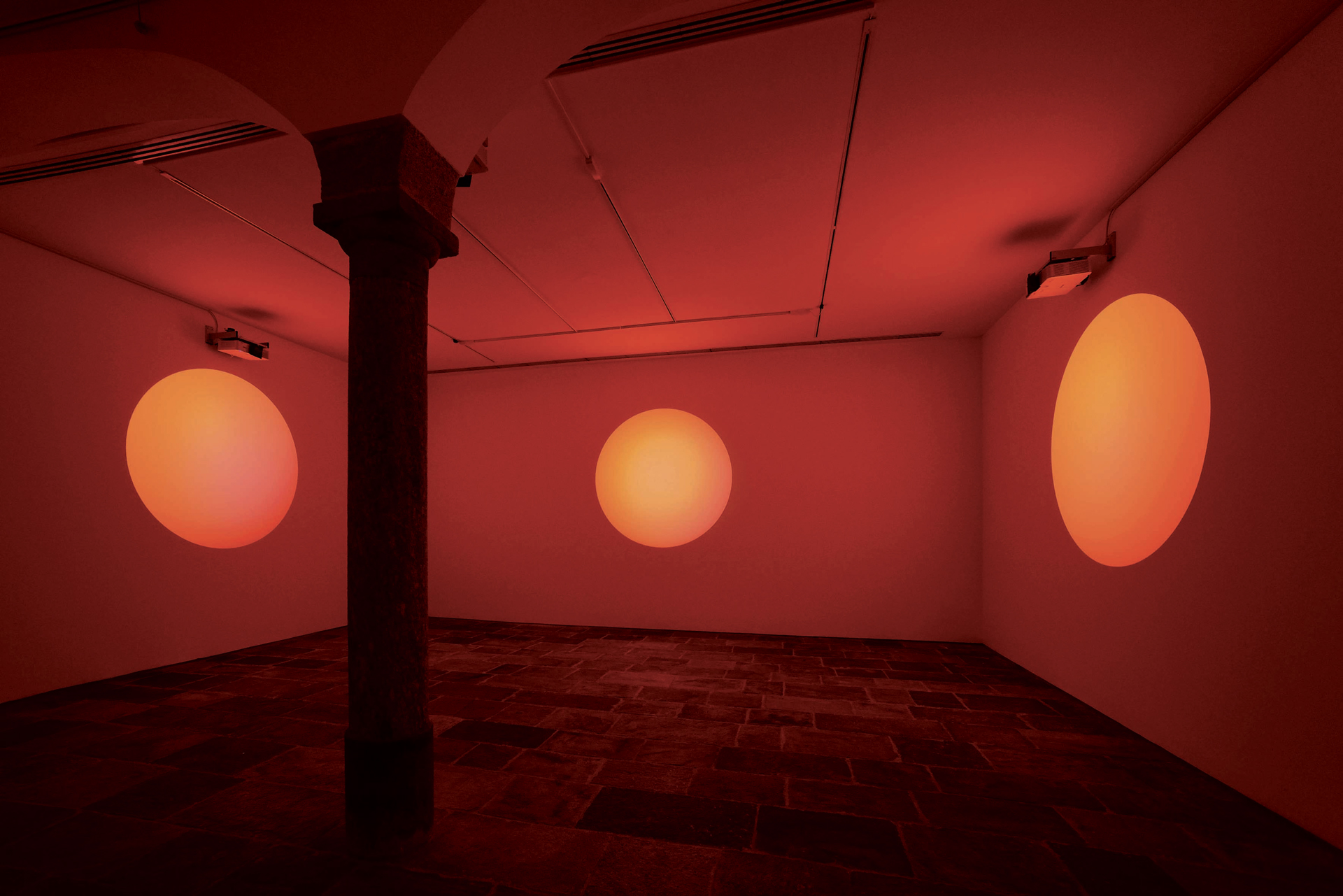 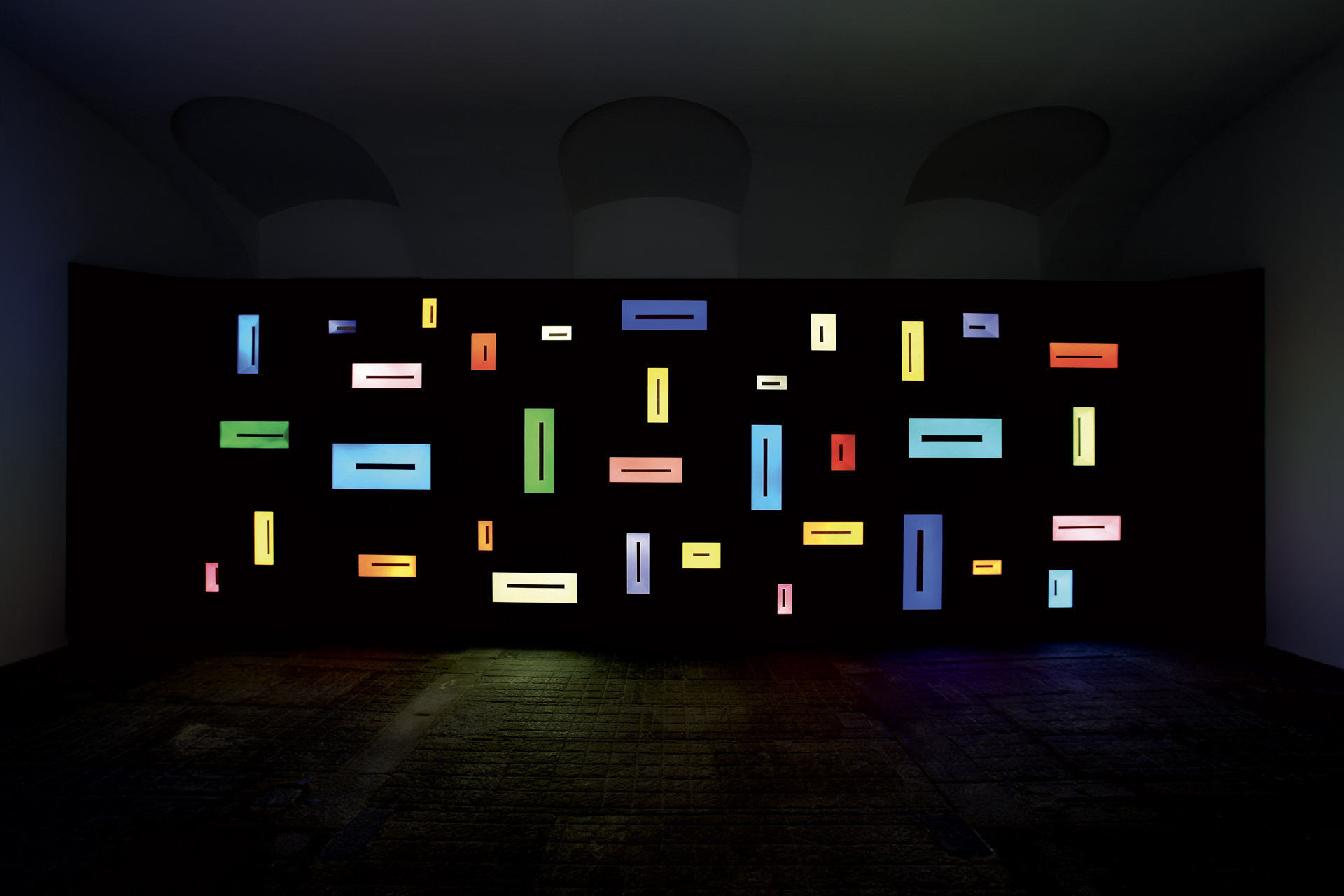 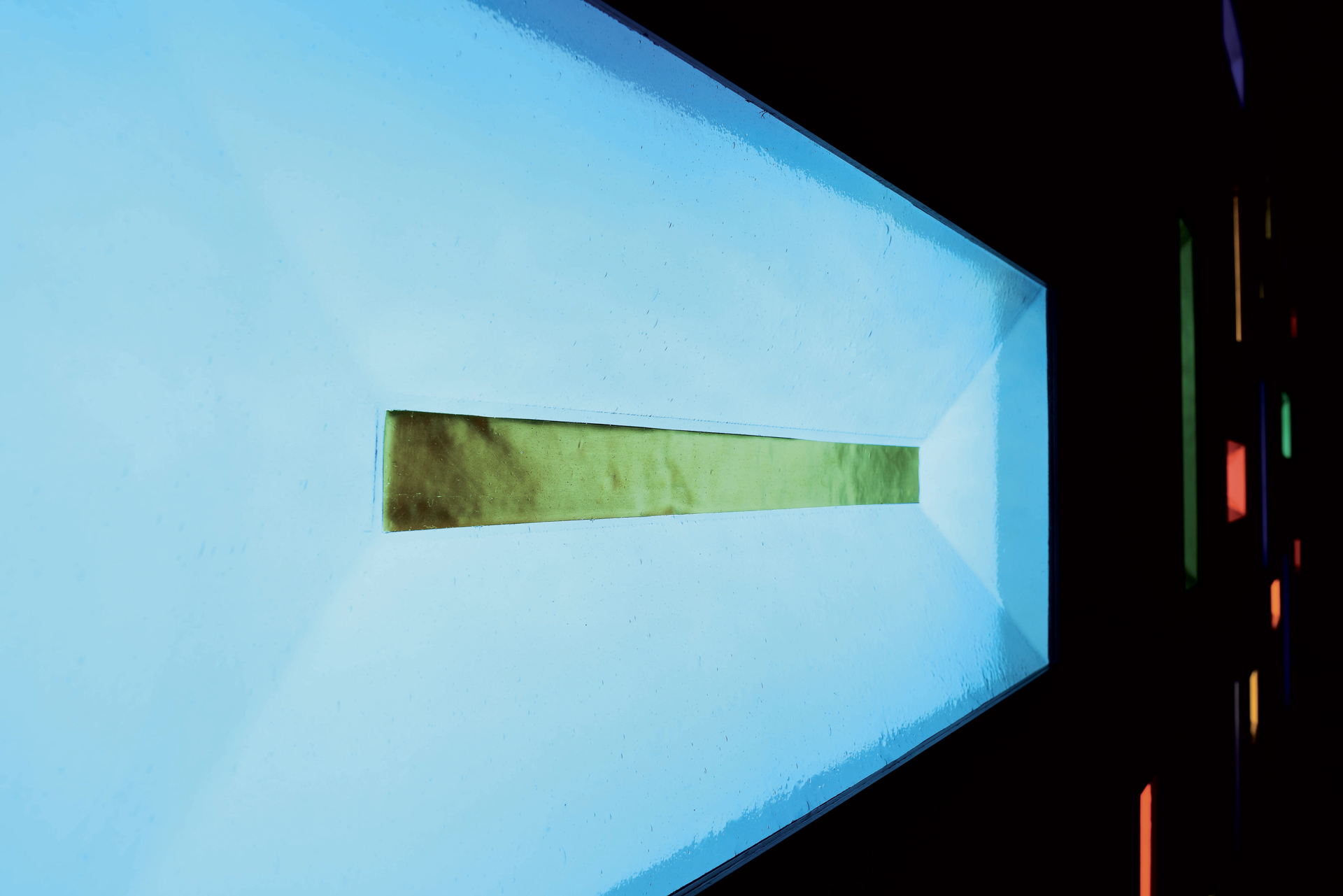 Daylight and night light, solidity of matter and evanescence of ghosts, artificial light and natural light, interior and exterior, color and shadow, solid bodies and haloes of light-color that dematerialize them, tangible realities, and pure chromatic reflections, what Chiara Dynys offers to the public at Villa Panza is, as always when the artist intervenes directly on the exhibition environment, an intense sensory adventure.

“Chiara Dynys is an artist of light. She has chosen to work with the intangible substance that is pure energy, but that is not just energy, it becomes something that warms us, makes us see the world.”

Mario Merz used to say that his works tended to ‘spill over’ from the space where they were installed into another virtual, imaginary space superimposed on the real one. I have always liked the expression to ‘spill over’ from one space into another. We could say the same about the site-specific works Chiara Dynys has created for her exhibition in the rooms and garden of Villa Panza. Here too, each environment “spills over” into another oner that is evoked, imagined and alluded to by using the full transfiguring force of her chosen element, in this case light, with its capacity to condition the perception, eyes and mind of the viewer.

The installation Camini delle Fate is a large black wall studded with lights, which are in fact, rectangular pieces of colored Murano glass in different sizes, cut to resemble picture frames and orderly arranged over the large surface. As is always true of Chiara Dynys’s wall installations, shapes are similar but not identical; hers are always constellations of differences. Here, the sole common element is the depth of the splay on each form, suggesting the idea of a family of shapes, but of various sizes and color. Each element is backlit, its center filled with a sheet of pure gold leaf, so that the light radiates on these so-called frames and literally “illuminates” the dark surface. The work’s title is taken from the constructions in Cappadocia that have been carved into the living rock: actual houses and churches dug out and frescoed by the anchorites who have lived there since the 11th century. From the rock that preserves and conceals the color of the frescoes to the dark wall where the light of colored glass glows, this space is an ancient, almost primordial evocation

“poured” into another space that the visitor, transported into this real environment, experiences directly, yet where the dark and the glimmer of the illuminated glass reduces recognizability.

Giuseppe’s Door is a medium-sized sculpture, a trapezoidal opalescent glass volume with an oblique, rectangular internal opening. This work has a history that is worth recalling. A much smaller version of the door, a multiple by Chiara Dynys from 1993, had long stood on Count Panza di Biumo’s desk. The artist began from that structure, its formal idea and material, opalescent glass, in order to pay homage to the memory of Giuseppe Panza by creating the larger version that we see here. This version was also in turn the starting point for the creation of another six examples, each in a different color, thus initiating a new thematic series that Chiara will work on in the future. Giuseppe’s Door stands on a base with rounded corners, covered with a cement-like material. It is lit from above by a light that changes color, creating a rhythmically varying luminous halo around the milky-white sculpture. From pink to fuchsia to orange to red, this halo turns the small Giuseppe’s Door into an iridescent body in harmony with the changing colors in the adjoining room. In fact, Dynys had a slit cut into one wall so that the light from the next room could also influence this one, thus slightly altering the architectural structure of the space.

Melancholia is the title of the installation whose light radiates on to the sculpture. It comprises a double projection onto the two walls that form a corner, where a luminous circle that changes color as described above has a dark circle superimposed upon it. The artist’s account of the work is interesting. Viewers will almost invariably associate the phases of the moon with the progressive shift of the dark circle over the lit surface, perhaps thinking of a lunar eclipse speeded up in a mechanical reproduction. It is less likely that their attention will focus on the mechanism that produces this mental association. In short, the work seems to have been conceived as a device to stimulate the imagination and the power of “creative integration” rather than rational thought.

An intimate atmosphere hovers inside these rooms, almost an invitation to assume a state of meditation and introspection. Meanwhile, towering outside is the large Giuseppe’s Door, heralded by the smaller sculpture indoors, which should not be seen as a maquette, however, but as a unique and autonomous work. It is better to consider it a precursor of the large-scale sculpture the public is about to see outside in the garden of Villa Panza. And what one sees is indeed placed “in full light”, and not solely due to its location. There is a large door, about three meters high, whose dimensions accentuate the irregular aspect suggested by its trapezoidal shape and its installation in a slightly sloping position, as if a part of the structure had sunk into the ground. Also, stronger here is the sense of imbalance caused by the oblique opening. In essence, Giuseppe’s Door, a tribute to Giuseppe Panza di Biumo, the person and the collector, is not an Arch of Triumph, it does not impose itself imperiously on the landscape, it is not a tetragon stone monument to events. It does, however, possess and emanate the strength that natural light provides. The

sculpture, entirely made from molten Murano glass combined with steel and Corten elements, has an almost transparent structure that leaves the internal load-bearing structures visible and allows the sunlight to pass through. Most importantly, the glass has been photosensitized: it accumulates light during the day and emits it at night, becoming, as Dynys says, a large fluorescent construction that glows in the dark, an almost ghostly presence.

Daylight and night light, solidity of matter and the evanescence of ghosts, artificial light and natural light, inside and outside, color and shadow, solid bodies and haloes of colored light that dematerialize them, tangible realities and pure chromatic reflections. As is always the case when Chiara Dynys directly intervenes on an exhibition site, she offers Villa Panza’s public an intense sensorial adventure.